After creating my business, I wanted to make business cards to serve as a nice and short substitute for my CV. However, I wanted it to feel premium, not some cheap cardboard or even flimsy yet rigid plastic. Then, a few months prior to starting this project, I made a laser-based photographic flash trigger. You can learn more about it in the post I made dedicated to it. In it, I made custom Printed Circuit Boards (PCBs). These are copper-plated panels made of a material called Fire Resistant 4 (FR4) which is based on fiberglass. They’re strong, durable, yet easy to etch via a photographic process and to print on. They’re so commonplace in eletronics that you can get 20 for a few dollars. However the shipping cost is high since they’re made in China (up to four times the actual PCBs price).

After that, one eveneing, I showed the PCB I had just received to some friend. That’s when they told me it seemed very well made and I should make business cards out of it. The day after this event, I went on my favourite EDA software and designed the circuit. I wanted this PCB not only to look good, but also be a functional. To that effect, I included an NFC chip on it and made an antenna within the PCB (the rectangular thingy on the right). The goal of this is to program the NFC chip to open LinkedIn on smartphones to my profile page, and also flash a little LED while we’re at it. 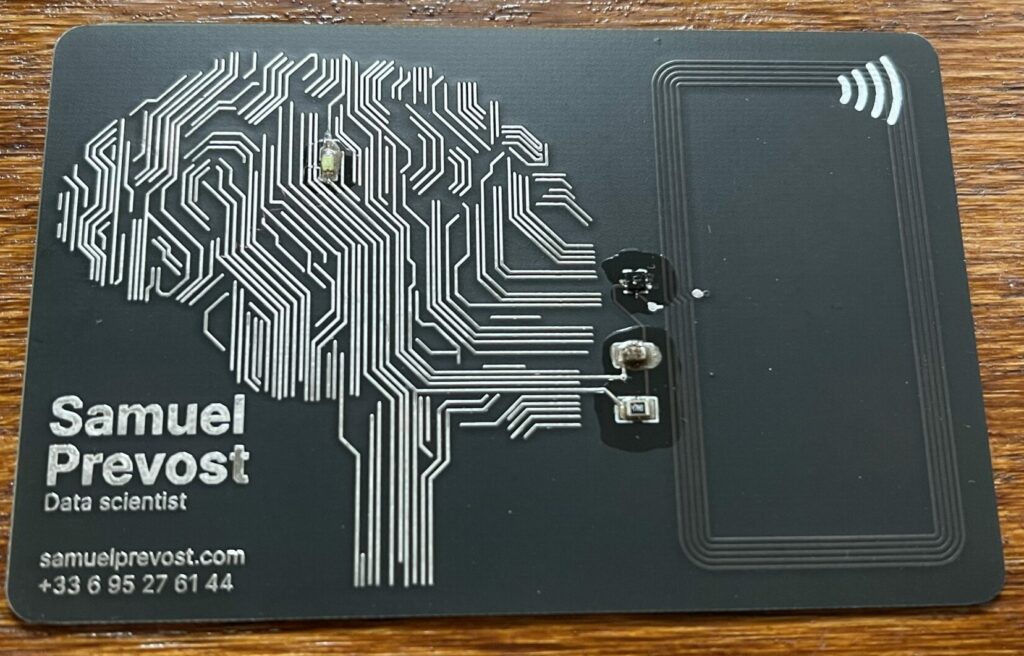 I thought of making a circuitboard-like brain since it’s a common way to represent AI, and I can literally etch a circuit board. On the back, I etched logos from companies and technologies I use everyday. 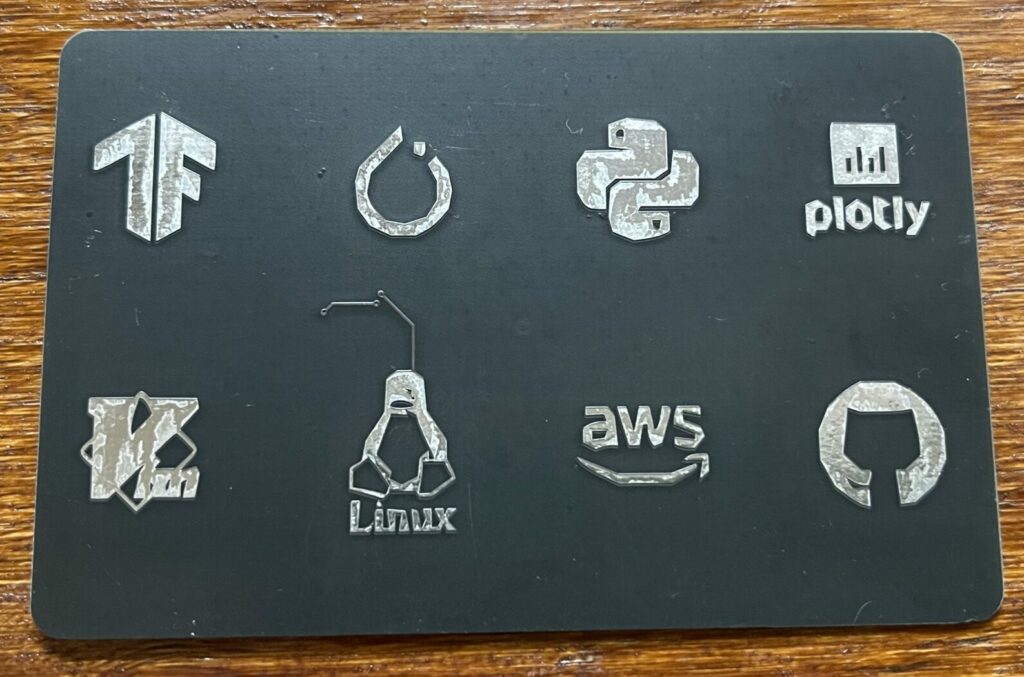 The PCBs arrived, they were perfect. However, to make the whole thinner card I opted for Surface Mounted Device components and made the PCBs half thinner too. As opposed to Through Hole Technology components, SMD are way smaller. This makes them really hard to solder by hand, but that’s usually not an issue for pick-and-place machines. For hobbyist like me however, the common solution is to use a hot air reflow station, but it can cost a lot and isn’t really time efficient.

Furthermore, to place these very small specs of high tech dust, I had to first put on some solder paste. I really need to put a very little amount, and to avoid overflowing I could’ve ordered an SMD Stencil. This is essentially a piece of perforated metal with holes where the paste should go. However, I got cheap and thought I could save a buck by not ordering one. Grave mistake. I initially thought of making one myself, but in the end I used two thin sewing needles and jewelry magnifying glasses. Even with these rudimentary methods, all my cards came out perfectly working on the first try!

After making sure no pads are shorted, I had to place the components with twizzers and then melt the paste. As I mentionned, hot air is usually the go to solution, but in my case I went with a more “traditional” method: The Venerable Pan O’ Sand. I got 5 kg of aquarium sand from Amazon for quite cheap. Then I put some in an old pan and brought the whole thing to a high temperature. Finally, I placed three of my cards in it and let it for a little while. Once I saw the solderpaste melt, I took them off and passed the cards over my NFC reader. When they cooled down, the blue LED in the middle of the brain lit up and the reader recognised the card! 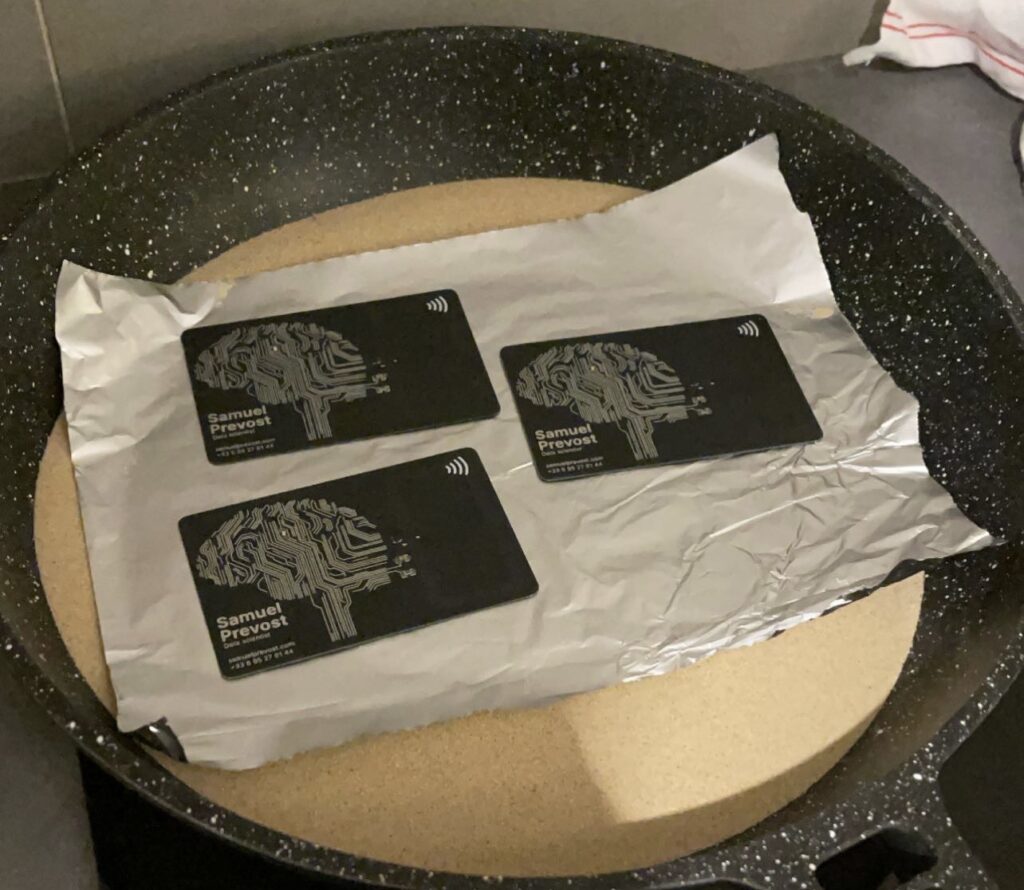 Once the cards were working, I repeated the process for the remaining 8 cards and they all came out working. Then, it was time to program them. The onboard chip, the NXP Semicon NT3H1101W0FHKH, has 1 KB of onboard programmable memory, so I used the excellent NFC Tools app to program them to open the LinkedIn app (or website) to my profile page when near any NFC equipped device. So far, I’ve successfully tested this on iPhones, but not yet on Androids, though considering how more “open” the Android platform is, it shouldn’t raise any issue.

If one day we’re finally able again to meet in real life, I might hand one to you!