My father is a professional photographer. A few months ago he wanted to take pictures of objects as they hit water at high speed. At first, he tried to drop objects in an aquarium and hit the trigger continuously during the drop. However, this made pictures really hard to reproduce for him. Indeed, he couldn’t take the same picture but with the object a bit higher, or lower. He asked me if there wasn’t a way to actuated the trigger at precisely the right time. Of course, lots of ideas sprung into my mind. By far the simplest was to have a claw dropping the object, then start a timer, and actuate the trigger then. However, he really didn’t like the idea because it would restrict what kind of objects he could work with (in shape, size, weight).

That’s when he suggested using a sensor like the ones openning doors in supermarkets. What he meant was an infrared sensor, but this kind of sensor doesn’t work well at high velocity. It’s also not very directional… Then I suggested a laser. It has all the qualities we need. Indeed, it’s directional, has a long range, and is very precise even for small objects. In three days, I had designed the first working prototype: 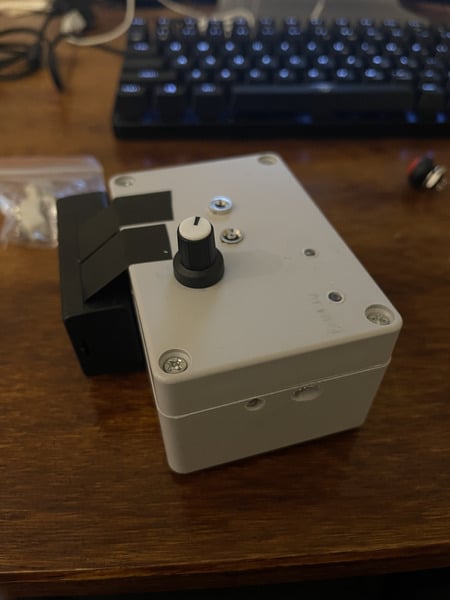 This crude prototype, although it looked like a bomb, worked without a problem for a whole day! It was based on an Arduino Uno I has lying around and on it I built an Arduino Shield, which is a circuit board that goes on top of the Arduino. The Arduino is a C-programmable microprocessor. I used a photoresistor (the right hole on the side), and a laser diode (the left hole). The box was connected to a photo flash, and emitted a laser beam. Then, on the other end was a little mirror reflecting the beam back to the beam toward the photoresistor inside the box. When everything was setup, a little red diode lit up. Then, when we dropped the object, it crossed the beam, the Arduino started counting in milliseconds, and then triggered the flash.

To avoid triggering the DSLR itself, we used a really long exposition time on it (like 3 seconds), but the whole setup was in total darkness. This meant no light came in the sensor. When I triggered the flash, for a few milliseconds, the sensor was exposed to our image. This allowed me to control the picture by timing the flash, not the DSLR itself. And that’s important because a flash is really easy to control, it’s simply a matter of going from 0V to 5V between two wires to trigger it. The hardest part was sourcing the flash connector (Prontor Compur connector) itself. I had to savagely open a sacrificial DSLR accessory and vampirise the female connector from there. It’s also neigh impossible to get infos about how it works so I hat to figure it out by trial and error.

On Earth, objects accelerate downward at 9.81 m/s². This is regardless of their mass.

This is really important for us. Since we can decide for how long the object will fall, we can deduce the height between the laser and where the object is flashed. Of course, we have to assume that the object is roughly the size of an orange so we can neglect the air resistance. The challenge here, however, is that the object falls exponentially faster. This means if it travels 10cm in 1 second at the beginning, but in 0.2 seconds towards the end! This makes timing the position harder as the laser gets far away from the point where the picture is taken.

To allow us to adjust that point, and therefore that time, I added a potentiometer. The little volume knob on the box, allows us to very precisely control the height and remake the exact picture many times. The downside of having a small box is that I can’t display the height that the potentiometer sets. 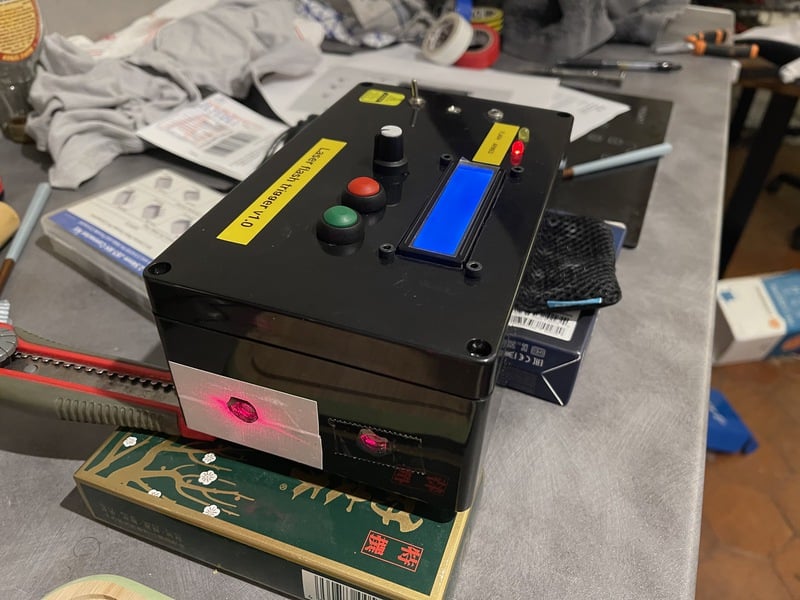 This time around, I picked a box twice the size. To have a nice feedback, I put an LCD screen on it with backlight since we’re in the dark during operation. I also added labels, a laser warning sign and a cool flip switch. The LCD automatically displays the timing and height selected, and it can go from 0 cm to 100 cm in height! The two buttons let you select different intervals of milliseconds: 0ms – 100ms, 100ms – 200ms, 200ms – 300ms etc. This allows for a way more granular control since the potentiometer has a range of only 100ms no matter the height.
For this prototype, I actually designed and ordered my first (but not last) Printed Circuit Board from China: 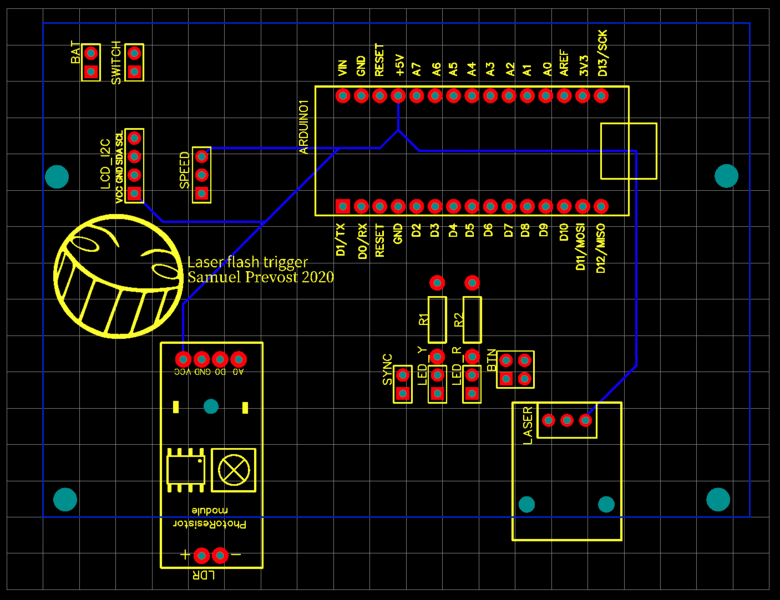 It sports an Arduino Nano which is the brain of the whole device and controls the laser-based photo flash trigger to take repeatable pictures of high velocity falling objects.

The mirror we initially used for reflecting the laser was really unstable. That’s when I had the idea of using a corner (retro) reflector.

This device allows us to go from 6 degrees of freedom to only two! Indeed, a mirror can rotate around the X, Y, and Z axis. It can also translate up/down, left/right, and forward/backward. In contrast, a retro reflector, no matter its orientation, always reflect light back from where it came. We can still adjust the exact point where it hits back by translating it up/down and left/right, but at least it doesn’t go all over the place when we do that. With the simple mirror, any little change in orientation would cause the laser to not hit the sensor. To fix that we used to spend a lot of time wiggling it. 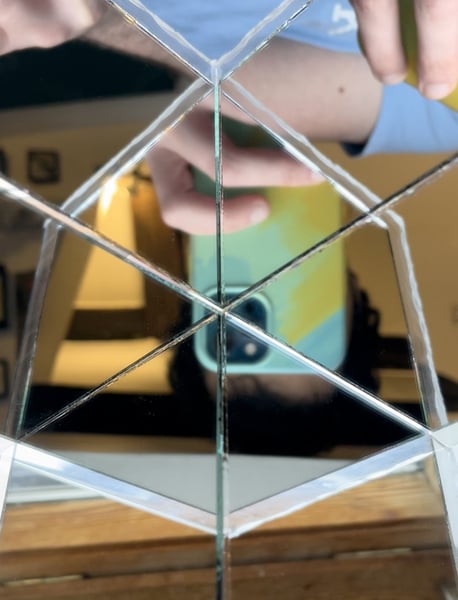 To make a corner reflector, I simply bought square mirrors with adhesive on the back. Then I cut an acrylic square box into a cube corner, and sticked the mirrors to it. The result is the above trippy thing. We stuck a GoPro mount on it, put it on a tripod and it worked like a charm!